“In this book … the method is all.” (Moretti, Atlas of the European Novel, p. 5)  Last night I was asked the question, what is untranslatable about Moretti?  Is it the intersemiotic action that he engages in?  Is his a false, or hyper, or infinite act of translation?  Can we map, translate, transfer, the internal logic of the European novel onto cartographic space?

Moretti gives us a clear and overly modest answer: “It is a beginning.”  Perhaps like the Ngrams produced yesterday to illuminate our discussions of untranslatables, this is a starting point, based in quantitative methods that allows complex and new qualitative discussions.  Moretto asks us to look at the maps he produces of where action happens in a plot (plotting the plot?) and then invites the reader to step back and think.  “How is it, ” he asks “that geography shapes the narrative structure of the European novel?”  Of course this not yet Moretti’s distant reading.  It is actually a very close reading, but one that translates fictional space into a physical/isometrically measured place.

Why does this sort of translation matter?  How is it related to our discussions this week of the Untranslatable and World Literature?  I would argue, because of its method.  Mapping the action of novels, known and less known texts, is a heuristic that reveals patterns that Moretti supports through a kind of New Historicism (Marxist mapping?) that then allows him to refute some of the more dearly held readings of, for example, Jane Austen’s novels.  After Said’s claim that the British upper classes would be unthinkable without the colonies, many historians and critics have built careers and much scholarship on investigating the connection between the stately homes and estates of England (and Ireland) and the slave trade (see, for example, Madge Dresser’s Slavery and the British Country House (2013) and her earlier Slavery Obscured (2001)).  Moretti casts doubts on Said’s claim (although I would love to put Madge and Franco in a room together) through his close, spatial reading of Austen and translates what Said argues is an economic necessity into a plot device.  The colonies have to exist as a plot mechanism that allows Austen to dispose of difficult characters.  But why the colonies?  why not the Continent?

The existence of the colonies, argues Moretti, permits a “strictly symbolic function” to occur in that they belong for Austen and her readers to a mythic geography, and allow for unexplained wealth to suddenly appear in a plot (pecunia ex machina?).  Do we agree with him when he claims that “it is not economic history that explains it, but ideology that projects, literally, an uncomfortable reality away from Britain.”  (p. 29)  What do we think of a geography of ideas?  Is, for example, the very “other placeness” of Russia in the 19th century the “fulcrum” that moves the plot/sujet of Dostoevsky’s novels along?  Moretti thinks so: “geography may, if not exactly determine, at least encourage morphological change.” (p. 32)  What is the causal connection here?  Do we accept the privileging of geography as a morphological device? Space can produce its own genre?

We return to the borderlands again that for Apter is a place of linguistic slippage and policed exchange, needing to be “untranslated” and destabilized as a checkpoint of nation/state/security.  Moretti’s borderlands are places that intensify figurality. (p. 45)  Maybe echoing Joseph Campbell, but clearly articulating Lotman and Propp, good morphologists of narrative, Moretti correlates plot to space, metaphor becoming the spatial container of plot.  Can morphology become topography? 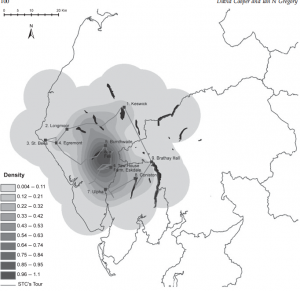 Maybe.  The work of Ian Gregory and David Cooper (both at Lancaster University) relates to this  in their development of a literary GIS.  As the co-authors state in the paper from which this figure is taken,  “the paper focuses on the ways in which GIS can be used to explore the spatial relationships
between two textual accounts of tours of the English Lake District: the proto-Picturesque journey undertaken by the poet, Thomas Gray, in the autumn of 1769; and Samuel Taylor Coleridge’s self-consciously post-Picturesque ‘circumcursion’ of August 1802. Alongside this text-specific focus, the paper also draws on recent spatial literary criticism to reflect, more generally, on the critical possibilities and problems associated with the digital mapping of space and place in literature. Ultimately, the paper seeks to open up methodological and critical space for the ongoing development of literary GIS.”  See Mapping the English Lake District

Dr. Katherine Faull is Professor of German and Humanities at Bucknell University, Lewisburg, PA. She is currently Director of the Program in Comparative Humanities. Trained as a philologist at King’s College, London, and Princeton University, she has published extensively on the Moravian Church in North America in the colonial period. Her current book projects are both the result of NEH grants she has received. Both are translations of manuscripts from the Moravian Archives, Bethlehem, PA where she is also a member of the Archives Board of Directors. Katie is becoming increasingly interested in digital ways of practicing philology! For more, go to http://www.katiefaull.com

View all posts by Katie Faull →
This entry was posted in Questions. Bookmark the permalink. Edit