In his piece on the ACLA website, the guru of World Literature, David Damrosch talks about the issue of scale and world literature; namely, who can read everything that is out there?  And how can we read it?

We can think of ordering all this literature/ work in terms of center/periphery (some have thought in terms of the hierarchy of major/minor –see Kundera and Kafka) or seeing the expanse of World Literature is so vast that we cannot think of it in terms other than national book markets.  Other critics argue about the question of language, post-coloniality, planetarity (Spivak) and ask what kind of approach to literature are we teaching our students?

For Damrosch, the nation/world question is one that is best thought of as figure/ground.  But, is it possible to think this way within the conditions of market and post-coloniality?  He claims, yes, but not returning to the crypto-nationalism of the 19th century (what was crypto about it?) and the notion that high literature is the embodiment of a nation’s highest cultural values [Herder].  This however elides the examination of minority cultures or bilingual authors [see Kafka].  Bilingual and minority culture authors confuse the genealogy of national literature: nation<->culture<->language.  Add post-coloniality to that and the picture becomes far more complex.

What is translatability and the “dream” of equivalence?  Within Translation Studies there are formal/technical terms that we employ everyday.  See the entries.  However, we also must do this in the face of Derrida’s claim that everything is at one translatable and untranslatable.  Personally , I find that André Lefevere’s concept of the conceptual and textual grids is the very  useful in teaching students about translatability and I find his chapter in the Bassnett/Trivedi volume helpful. Given my obsession with spatial visualization, I like to think of translation as an act of “mapping meaning” and thus the concept of textual and conceptual grids allows us to examine the mapability of meaning within the greater hermeneutical framework of society and politics.  Lefevere brings up the old chestnut of “fidelity” and that it is not always the best guide to translation.  It is important in technical manuals but no in advertising, because of the need to “localize” in translation.

When foregrounding fidelity, Lefevere warns us of the danger of assigning primacy and privilege to the source text and suggests that we can think of the ST as Europe and TT as the rest of the world.  Calling on the ubiquitous master trope of EATING, there exists the danger that the intention and style of the ST will devour the TT [is there the fear that the TT might do the same to the ST?]  and that there will be a wholesale transposition and translation of ST’s conceptual and cultural grid onto TT culture.  The predominance of translation into English (and other European languages) perpetuates the colonizing process.  A good example of the politics of translation is that of Fitzgerald’s translation of Omar Khayyam which was considered to raise the ST to the status of art within the dominant culture.

For example, how do you translate a sexual “sweat” in Shakuntala into the national language of the women who only glow?

What is translation according to Bassne 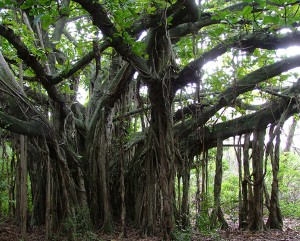 tt and Trivedi?  Must it always be linked to a spatial metaphor, the carrying over of meaning in the German and Latinate calc?  Can’t we also think about it as a temporal figure?  A “Nachsagen”?  anuvad?  How does this change our conception of the translational act?  How might the image of the banyan tree with its branches becoming new trees help us?  Is this a form of “rhizomic” translation?

We then also have to face Salman Rushdie’s claim that all postcolonial writers have already been translated.  What is the status of English as the language of the postcolonial writer?  Chapter 2 considers strategies of postcolonial writers who are writing and publishing  English to signal their “otherness”.  Indian and African writers who do not reject English but who already see themselves as translated or hybridized and thus, within their texts, signal this through code-switching/uses of culturally specific terms, perhaps even needing to gloss their own pages (Chinua Achebe adds a gloss of Igbo terms at the end of Things Fall Apart, as does Chimamanda Ngozi Adichie in Half of a Yellow Sun).

Do we agree that Rushdie’s English is already a translation because it is a language that no-one would speak in India?  “Indian English writers are thus not so much translating Indian -language texts into English as using various strategies to make their works read like translations.” (Bassnett/Trivedi, p. 53.)  A Schleiermacherian move to produce the “alienating translation” in order to “creat[e] an English that resists easy appropriation British or the West as a whole is thus a primary task” of the postcolonial writer (Bassnett/Trivedi, p. 55).

So, that brings us to Emily Apter’s critique of the project of World Literature and her elevation of the concept of Untranslatability to the “fulcrum of comparative literature.”