If translation, as Apter claims, is the central moment of the Enlightenment’s project to create a discursive space of mutual recognition, democratic freedom, mutually agreed upon rules, structures and  a disinterested program of civil rights (Apter 2013, p. 129) then the elevation of Untranslatability might seem to counter all those hopes.  How can we live in a world of mutual misprision?  Isn’t it incomprehension and unintelligibility that cause conflict, war, hatred?  In her brief chapter on the keyword “Peace” Apter articulates the goals of the field of Comparative Literature in terms that would gladden any Dean of Arts and Sciences’ heart.  Uncannily echoing the goals of the program to inculcate Enlightenment values of mutual respect and community building circulated just yesterday by our director of new student orientation (see email “Being Bucknellians” inviting faculty to facilitate discussions of new student comprehension of our university mission statement), and also our our program goals in Comparative Humanities, Apter summarizes the field’s educational mission as “dedicated to producing complexly cultured, linguistically proficient citizens of the world who foster global understanding and the pragmatic conviction that universal consensus … is achievable through an enhanced linguistic commons.” (Apter 2013, p. 129)  The problem with this vision of ethical and linguistic transparency is, however, its maintenance.  Indirectly invoking the figure of Edward Snowden as the great “Untranslator” of Babel before its fall, the reader is warned of the spectre of state security.  Translating into terms closer to home: yes, it is an excellent model for student behavior for all to agree to create a community of mutual respect and care, but this must be maintained, monitored, surveilled.   The Enlightenment must also be policed.  Those of us who lived through the years of the “socialist garden” will recognize those arguments: “Vertrauen ist gut, Kontrolle ist besser” (Markus Wolf)

What might this policing look like?  Apter, calling on Hamilton, turns to the old fashioned discipline of philology as a tool to examine critically the spread of “globish” and to monitor the discourse of the post 9-11 world.  For example, how has the discourse of security overtaken and bled into the talk of peace?  Resorting to the distant reading of HUGE AMOUNTS OF BOOKS through the Google Ngram tool and entering the terms “peace” and “security” in English language published (and scanned) texts from 1600 to the present day we see the graphs of occurrence. 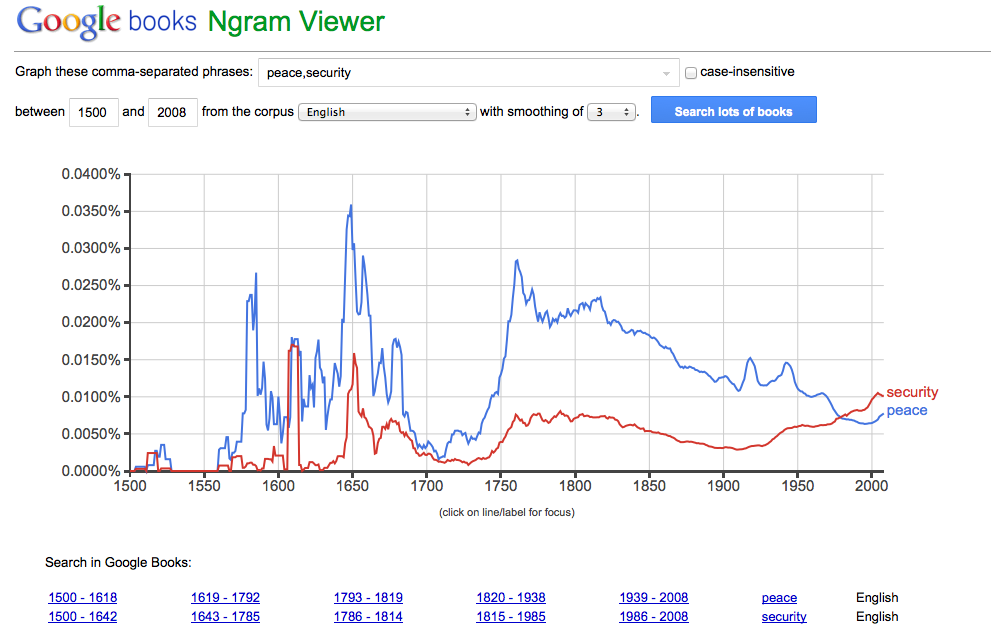 If we change the corpus to only “English fiction” we see a different graphic: 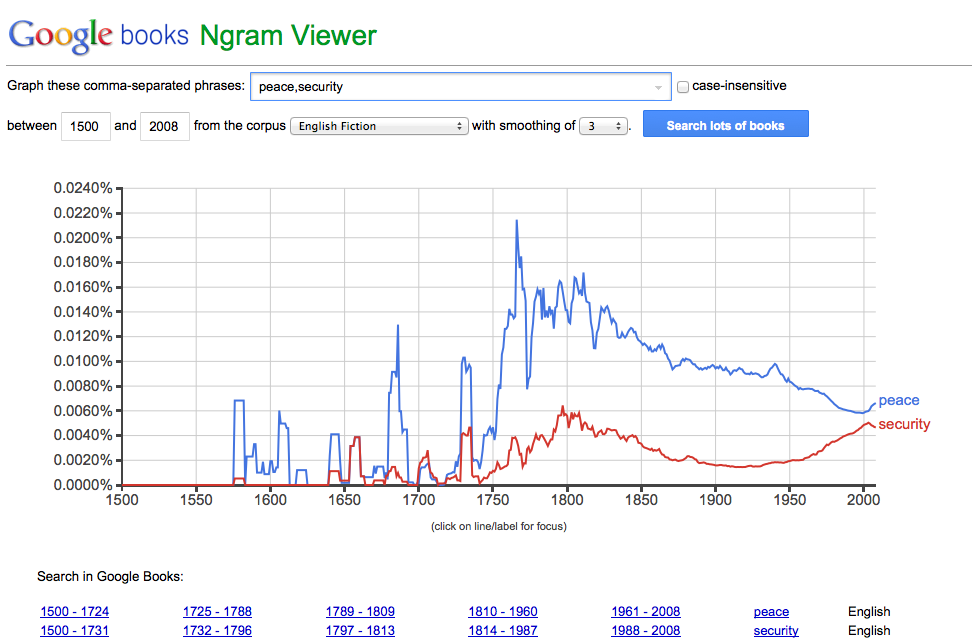 Does this mean that fiction is more concerned with the Enlightenment project of perpetual peace, or, sorry, eternal peace as Kant probably meant (drawing on the semantic fields and lexica of theological discourse) than non-fiction?  Maybe the distant reading leads us to a closer reading, a more careful reading that relies on the etymology of words, a translational act that can become an infinite inquiry?  Maybe the Untranslatable is actually more of a perpetually translatable, always trying to speak the remainder of the source language, becoming poetry.

The translation of the Dictionary of Untranslatables is not, I am afraid, an example of this.  I chose to read through the entry on “sex” and was infuriated by the translation.  This is “Frenglish,” a thinly veiled anglicization of French discourse that only served to obfuscate rather than enlighten the reader on the complexities of the interrelated interlingual fields of gender, genre, genus, Geschlecht and sex.  How bizarre that the Untranslatable has become the poorly translated in a work that appears to have as its mission the foregrounding of the complexity of words and the love of logology.